Did I do that!!! The classic one-liner from Jaleel White’s character Urkel on the classic show Family Matters. A 90’s sitcom television show that aired on ABC. The show told the story of a middle-class African American family living in Chicago.

Midway into Season 1, you’re introduced to the character Steve Urkel; the nerdy clumsy neighbor of the Winslow family. One of my favorite shows as a kid, I enjoyed watching Urkel because I considered myself a nerd and appreciated what he added to the storyline.

Cast as a one-time character, Urkel quickly became the show’s breakout star. Setting the trend and helping the show to 9 seasons, White’s impact in the culture has left an imprint in which every generation knows the beloved character “Urkel”.

Never say Never. A theme that plays a part in many careers when transitioning and evolving as an Artist. Being authentic is key when you’re looking to grow your brand and while building a foundation.

Jaleel White played the character Steve Urkel; one of the most popular acts in the world. Before getting his start, White stared in TV commercials; most famously with Bill Cosby for Jell-O. The glory and fame of Urkel became suffocating, White had no interest in it anymore. Due to the character’s popularity, White was defined by “ Urkel “ that he found difficulty finding other roles.

The individual outgrew his role, but its impact continues to grow on. With the legalization of cannabis, the multi-talented White looks to now set a new trend for the new generation of marijuana consumers who grew up watching his character with the launch of its purple. Evolving the classic catchphrase, “did I do that?” to now, “did I grow that?”

Adapting in the music culture, “dude have you seen this? “ White explains, many people ask if he has his own weed. From eighth jars to rolling trays to rap song mentions, Purple Urkle and White have lived apart like fraternal twins separated at birth.

Now, actor Jaleel White is joining the growing list of celebrities who’ve now have launched a cannabis brand. It all started on a trip to Oakland, California. The Bay Area, where I first got my opportunity in cannabis. Growing in the industry starting with clones and propagation. White’s opportunity started much differently; a conversation started with his future partner on a flight.

From playing Urkle to now partnering with 710 Labs on his new brand itsPurpl. A project that manifested after 20 years of pure hearsay and confusion. Is that Purple Urkel? Even his character displayed on cannabis products.

A catchy marketing name, and play on words. White and new partners took advantage of its marketability. The cannabis community and pop culture coming together; in an industry that struggles with inclusion and diversity.

While growing in the industry White faced challenges. There’s not much diversity I learned while working in cannabis. Though tough, it’s a rewarding feeling growing and possibly shining a positive light on black entrepreneurs in Cannabis. White was fully prepared and capable for this opportunity with the right mindset to match the brand.

“Anyone who knows me personally as Jaleel White, knows I am an ardent seeker of curated adventures, big laughs, and excellent food,” White wrote. “All three of these interests are enormously enhanced by top-shelf cannabis.”

If you think about it marketing-wise, White’s approach is accurate by aligning his brand with his true self and not the character. Now a new storyline begins, who is Jaleel White? And what’s the experience of indulging in the new cannabis products itsPurpl.

A collection of Pods, Joints and Eights. Never thought I’d see the day, but the options go from flower to merchandise. Which not surprisingly, sold out online.

Working in fashion, I can see this shirt worn on La Brea, a fashion avenue in Los Angeles, on a summer day. Maybe matching it up with some kicks, while on Fairfax; relaxing indulging in the flower products.

Anyone smoking Purple Urkle before the sun goes down should expect a nap in the near future, or a very early bedtime, at the least.

All joints are made by hand. Referred to as “doinks” their buds are separated each by hand, which is usually a tedious step in the process. With the collaboration with his team in Oakland, their one of the best inefficiency. Without the use of grinders, no sticks or excess interfere with enjoying the burn of the flower.

Their organic flower is carefully cultivated for proper smoke leaving consumers happy with smiling faces. Their motto “we only sell what we smoke.”

One of the popular strands is Stefan ( the White X Purple Urkle. A tribute to his alter ego character “ Stefan”, is bred by OG Raskal Genetics and pheno by 710Labs and White. A cross between Purple Urkle and The White, this hybrid has a rich piney flavor and generous high. A light inhale with a taste of grape, berries, or citrus to bring it home.

Next, there’s Purple Urkle. A strand anticipated by the masses of Cannabis smokers. If you ever smoked the old-school purple urkle back in the day, then this is the one you have been waiting for.

With quite the same hit and taste, the Purple Urkle is a bit more funky, blazing a trail of flavor until the end of the joint. The structure of the bud is important in the industry. Being able to be a Trimmer, there’s techniques to having a clean bud. With immediate attention, White and 710 Labs are successful at producing that tip top structure highlighting the deep purple colors surrounding the bud.

The relaxing effects make the strain a great candidate for medical issues, which are becoming a topic of conversation in the cannabis community even in the mental health field.

A reliable way to help you relax and sleep, Purple Urkel is just at the beginning of its story. Maybe like the character, products can help grow and leave its mark on the mainstream media. Changing the outlook of Black entrepreneurs and Cannabis. 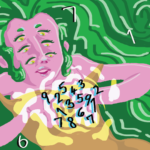 Types of Numerology: Understanding The Spiritual Messages In Your Numbers
Next Article