CHICAGO, July 28, 2021 /PRNewswire/ — Jerry Frye officially announced the release of “Cannabis the Cat to the Rescue,” a children’s book written to help dispel the myths surrounding the use of the cannabis plant for medicinal reasons. Lushly illustrated by Mike Motz, “Cannabis the Cat” is a fun way to introduce younger readers to the legal uses of the cannabis plant in a way that is not attached to negative stereotypes. “Cannabis the Cat” is available as both a storybook and a coloring book via Amazon, with a portion of all sales donated to the National Organization for Reforming Marijuana Laws (NORML). 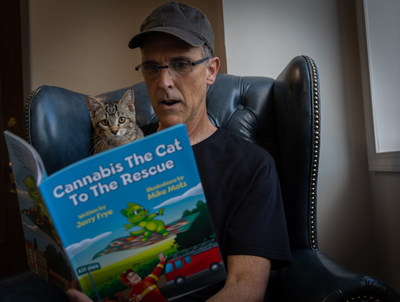 Story Synopsis: Cannabis the Cat is a superhero who uses his magical flying hemp carpet to visit and help those with CBD and medicinal-marijuana emergencies. Along the way, readers discover an educational adventure that is open, direct and honest, discussing the wide variety of uses for the hemp plant. Frye’s story is perfect for the parent needing a starting point to begin a conversation about drugs with their children, or a fun-loving millennial looking for a cartoon story about weed. The Cannabis the Cat series will expand to include many more adventures in the future, as the wind-surfing, traveling cat explores the world looking to help other people through the healing powers of weed.

Frye explained his guiding concept for “Cannabis the Cat,”: “It’s very exciting to see all of the new changes in the U.S. regarding the legalization of weed. But this is still very new stuff. The first state to legalize was Oregon, and that was only seven years ago. And while dozens of states have since followed suit, cannabis has been criminalized for so long that it’s still often a negative in the collective consciousness of our society. It’s a controversy that probably won’t go away for quite a while. So I realized that pro-cannabis parents needed an educational way to explain cannabis to their children without false-judgements or stigma.”

Frye discussed the future for “Cannabis the Cat”: Well, I’m really just getting started. I recently launched the website for the book as a supplement for parents: offering 420 news, a blog, future contests, and other related “Cannabis the Cat” material. But most exciting, I’ll be officially promoting the book while doing a crowdfunding campaign from August 5 through September 7, attending multiple trade shows along the way. I will begin the campaign by traveling in and around Louisville to arrive at the Kentucky Hemp Association Annual Conference & Tradeshow (KYHA) on August 5. From there, I’ll move on to Atlanta, Ga., and on August 7, I will attend the ‘Woman Who Cannabis’ convention at the Doubletree Hilton. I will then travel through Oklahoma and Denver to arrive in Las Vegas for the Cannabis Conference on August 24–26. Finally, I’ll travel to my last destination in Portland, ending the campaign on September 7 at 4:20 p.m.“

“Great book for educating on the medicinal benefits of cannabis and to show that the plant does not need to be shown in a negative light. Well written and well-illustrated!” –LP

“Purchased this for my nephew’s son. The illustrations are absolutely adorable! The literary content is spot-on and very informative. Hope to follow all of ‘Cannabis the Cat’ Adventures. ” – D.