Dino Baccari was driving to pick up his children from his mother-in-law’s house in
Pennsylvania when he was pulled over for going 72mph in a 55mph zone. A medical
marijuana patient of his native Rhode Island, Dino thought nothing of the $10
leftover baggie of stems in his glove compartment. So, when the officer noted the
smell of cannabis, Dino complied and handed over his bag. Sober and with his
Rhode Island medical marijuana patient card in hand, Dino was handcuffed and
taken into custody.

In this case, Dino was lucky. The officer did not ask Dino to complete a blood
chemical test or he would have spent 3 days behind bars on a DUID charge: driving
under the influence of drugs. Pennsylvania, along with many other states, adheres
to a zero-tolerance policy for Schedule 1 drugs along with an implied consent
law.

The zero-tolerance law applies to any individual in physical control of a car,
boat, train or airplane. The implied consent law states that all persons operating a
motor vehicle in the state of Pennsylvania must comply with an officer’s request for
a chemical test or face substantial penalties.

An officer with reasonable suspicion of drug use, can ask that a driver undergo a
blood chemical test. If the blood chemical test shows even trace amounts of THC or
[THC metabolites] in the bloodstream, it warrants a [DUID] arrest. It does not
matter whether the car is in motion or parked, and refusing to comply with the
blood test assumes guilt.

Additionally, in its current legislature, PA lacks a [reciprocity law]. This is why Dino’s medical marijuana card from Rhode Island did not protect him from a possession charge in Pennsylvania. DUID arrests are serious. First-time DUID offenders are incarcerated to the highest extent of law within Pennsylvania’s court system. Upon arrest, the accused is
required to serve a 72-hour incarceration sentence, pay hefty fines, and face the very real possibility of losing employment.

Medical marijuana patients who have previous DUI or DUID convictions within the
past 10 years are at even greater risk. Consider the best-case scenario of a
cannabis patient with a DUI or DUID arrest in his early teens or 20s who
participated in Pennsylvania’s ARD program.

ARD stands for Accelerated Rehabilitative Recovery program. It is a program that places the accused individual on one-year probation, with mandatory safe driving classes and drug and alcohol evaluations.

When the individual completes the probationary year without another
criminal conviction his charge is expunged; with one important caveat: there is a 10-
year period AFTER the completion of the ARD program during which the individual
cannot be charged for another DUI or DUID within the United States of America…or
it will count as his second offense.

Why this matters? Medical marijuana patients who have smoked a joint the night before, a week before, or even a month before a blood test will still have trace amounts of THC metabolites in their bloodstream. Many patients prefer to consume their prescribed THC medication with baked goods and cooking oils, and this method keeps THC metabolites in the bloodstream for even longer periods of time. Regular users, such as those treating chronic pain, will have higher amounts of THC in their bloodstream for months after their final dosage, making them at the highest risk for unfair DUID arrests and jail time. [Which is what happened to this California woman].

Medical marijuana patients in Pennsylvania need to take extra precautions driving through the Keystone state. Any presumption of drugs, whether real or imagined, can result in a request for a blood chemical test and substantial penalties and fines WILL be imposed regardless of compliance. Medical marijuana patients truly are sitting ducks in Pennsylvania’s current legislative environment. 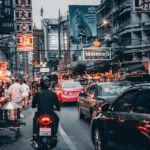 Thailand Moves Forward With Legalization of Marijuana
Go to mobile version
Welcome Back!